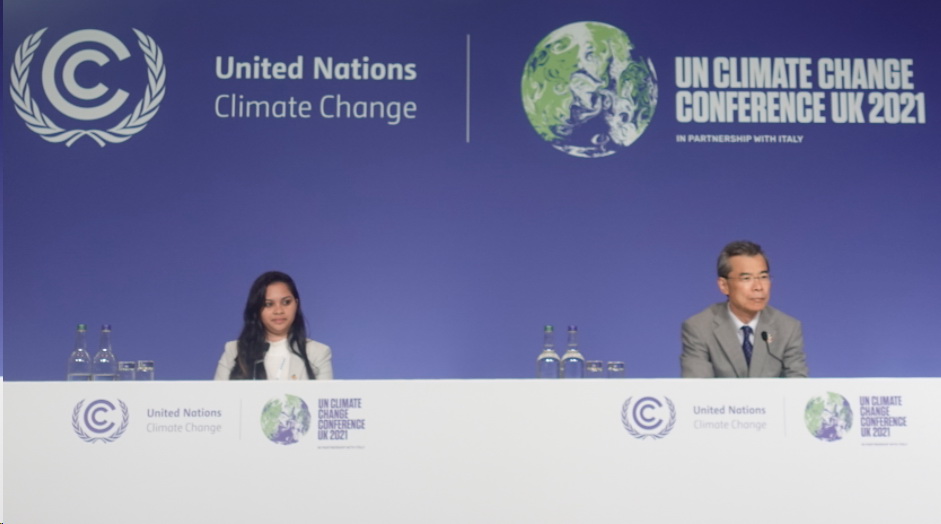 The UN Climate Change Conference (COP26) was held in Glasgow from November 1-12, to further the goals of the UN Framework Convention on Climate Change (UNFCCC) and negotiate the implementation of the Paris Agreement which aims to keep global warming to below 1.5C. Peace Boat, together with other civil society organizations, took part in calling for greater ambition and climate justice.

Peace Boat held several side events throughout the conference in the UNFCCC administered Blue Zone. In the first week, an event at UN DESA’s SDG Pavilion focused on SDG13 (Climate Action) and SDG14 (Life Below Water). Nathalia Lawen from Seychelles, who joined Peace Boat’s Ocean and Climate Youth Ambassador Program, spoke about the importance of connecting youth from Small Island Developings States (SIDS) on the front line of the climate crisis. Nathalia said, “even though we are all physically distant, we are all connected by the ocean”.Peace Boat was joined by Oceanic Global who emphasised the role of the oceans in climate change mitigation and March for Science who spoke about the need to follow science based recommendations.

At the Nature+Zone Pavilion, Peace Boat’s Founder and Director Yoshioka Tatsuya spoke on a panel focused on the Green Economy which covered a range of topics including climate finance and renewable energy, including the example of Blue Planet Alliance in Hawaii working towards a 100% renewable energy future. Stressing the need to rapidly decarbonize the maritime sector, Yoshioka Tatsuya introduced Peace Boat’s Ecoship as a transition model, saying, “The technology is available, why are we using 100 year old technology for shipping”?

On the penultimate day of the conference, Peace Boat held the side event “Connecting Large Ocean States for Climate Action and Youth Empowerment” in the Alliance of Small Island States (AOSIS) Pavilion featuring presentations and a discussion between three youth leaders from islands on the front line of the climate crisis. Speaking about the importance of including youth, Kim Allen, a Youth Development and Communications Practitioner from Papua New Guinea, said “Youth Innovation and creativity is a potential for world leaders to tap into, for them to realise the potential.  Youth are very creative, very innovative and they are active in the space of advocacy and actually doing the work”.

Epeli Lalagavesi representing the Alliance for Future Generations – Fiji, a partner with which Peace Boat has organized programs together on climate action in Lautoka, Fiji used the analogy of the Uto ni Yalo (‘Heart of the Spirit’), a ‘vaka’ or traditional Fijian sailing vessel on which Epeli sails to coastal communities on the front line of the climate crisis. “The vaka is a symbol of hope for the Pacific Islanders, a symbol of our voyage or journey – where we were, where we are and where we want to go”. He explained that elders are at the stern rowing while youth navigate. “And that to me is how we should voyage forward with young people at the front to navigate”.

Talking about inclusion of youth from small islands in the COP spaces, Kim said there was a difference between representation and active participation, and that youth leaders needed to be equipped to actively participate in the processes. Ashneil Jeffers, a Peace Boat Ocean and Climate Youth Ambassador Programme alumni from Montserrat, said “People who are in a privileged position… need to learn to give up your spaces for people who are less privileged. Climate Justice is such a vague term, and what is climate justice for me may be different to what it is for you. There may be similarities but it’s not the same. So those in a position of privilege need to give up their space [to others]”.

In a discussion about the youths’ takeaways from COP26, Epeli said it had been the most exclusionary COP with civil society, SIDS and those on the front line not present enough in the negotiations. Furthermore, the talks were inconsistent with the recent IPCC report that had given a 12 year window to avert climate catastrophe, and he emphasised that world leaders are “negotiating our lives away”. Epeli lamented the lack of real commitment from carbon producing countries, which was emphasised by Ashneil who said, ‘It is easier to make new promises than to fulfill old ones”.

Ms Charlene Mersai, National Environment Coordinator and representative of the government of the Republic of Palau, gave opening remarks at the event which also heard from Brandon Levy of the Sustainable Ocean Alliance, which organizes capacity building programs for youth, and Leo Rogers of the Blue Planet Alliance.

Peace Boat also worked with partners including Blue Planet Alliance and EarthX on several side events in the city of Glasgow which featured various speakers including poet Selina Leem from the Marshall Islands, and saw the COP26 premiere of the new “Don’t Choose Extinction” UNDP signature campaign in a conversation with UNDP Campaign Executive Producer Helen Trickey powered by EarthXTV on November 5.  In addition to programming in Glasgow, Peace Boat had a booth online for the duration of the conference at the COP26 Virtual Ocean Pavilion.

During the Global Day of Action for Climate Justice on November 6, Peace Boat joined the actions which took place in Glasgow City together with other peacebuilding and activist organizations. Hundreds of thousands of people across the world took to the streets on that day with over 250 decentralised mass mobilisations, bringing together movements to build power for system change – from indigenous struggles to trade unions, from racial justice groups to youth strikers. Civil society held various demonstrations and calls to action throughout the conference including CAN Japan calling for an end to Japan’s reliance on fossil fuel during Prime Minister Kishida’s visit to the conference. Parallel to the official UN Climate Change Conference, the People’s Summit for Climate Justice was organized by the COP26 Coalition to bring together the climate justice movement to discuss, learn and advocate for change.

The final outcome of the COP26 negotiations has had a mixed reaction. The pledge to speed up the end of fossil fuel subsidies and reduce the use of coal has been hailed as historic and unprecedented. COP26 resulted in the completion of the Paris Agreement rulebook and kept the Paris targets alive, giving us a chance of limiting global warming to 1.5 degrees Celsius. But it has also been widely criticised by civil society with the Climate Action Network (CAN), of which Peace Boat is a member, saying “The failure by rich countries like the US, the EU and the UK to support a funding facility for loss and damage is a betrayal to the millions of people suffering from the climate crisis in developing countries”.